Meetings with other artists

Stephen Long and Liza Demetriou from the UK, stayed with us in August 2017. Stephen is an artist and did a lot of beautiful drawings during their stay. Here is one of them! He also appreciated my work that he saw in the gallery, here in EIV, and wrote the following text. Thank you Stephen!

Lida’s work can be divided into two separate but related areas: collages and intricate papercuts. The collages are typically light in tone and made up of drawings, cut paper, found objects and scored surfaces. While the images, for example of the face of a friend or a pattern, offer a way in, the juxtaposition of objects is an enigma. Owing much to established European collage, such as of Kuty Schwitters, they are nonetheless unquiquely Greek; sunburnt, windblown and ethereal like the island of Crete where Leda spends half her year.

The second workstream, the papercuts are something else altogether. While they share much of the bleached and limited palettte of the collages, these are repetitive labours of love, sheets of paper reapeatedly cut to form a skein or gauze. Delicately mounted they floated in a void behind the glass. While the collages invite the viewer to work out their meaning, these works ‘are’ their meaning. They are the acting of their making. The initial decision: what pattern, what cut simply then being repeated like a mantra for hours. They perhaps say something elemental about all of us, that life is a pattern where we all make some decisions but much is out of our control. 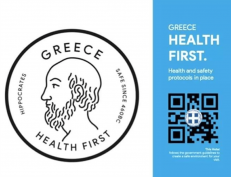 Our staff has attended the educational/training course provided by the Ministry of Health and our hotel has obtained the corresponding certificate. We confirm that we follow all the sanitation, hygiene and protection guidelines for Covid-19.

ABOUT EIV
ARTISTS IN RESIDENCE
STAYING OVER IN ATHENS? 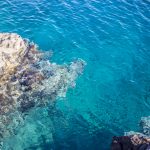